Our patience is being tested at the Italian Nationals. Day after day, the weather forecast predicts the winds to die down the next day, but the Bora keeps blowing strong and it looks like we will only have had 2 tasks... Yesterday, we were sent up to Tre Pizzi, although our chances to fly were nil. Organizer psychology: you have to try everything to try to have a task. Let's see what today's decision will be, since the weather forecast is exactly the same: no flying where we are, while the rest of Italy has good weather. Quite frustrating. 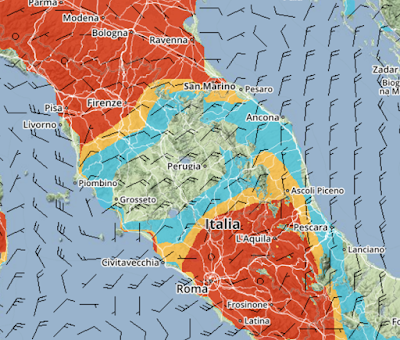 I think it's time to head to Slovenia or the southern Alps. At least there will be 2 flying days over there...

The 2016 Italian Nationals are held in Sigillo, in Umbria, central Italy. Sigillo lies at the foothills of Monte Cucco, a special place in hang gliding because of the top landing options and the well known laminar conditions in SW winds, which allow for dune gooning on a 1500 m mountain.

However, we are currently in a rather strong NE flow and yesterdays task was launched from Tre Pizzi. What looked like an easy 80 km ridge run, turned into a tough battle due to rather weak thermal conditions and little ridge lift because the wind was too cross. Even before launching I had made the decision to take the last (second) start gate because it looked like conditions were going to improve during the day. This didn't really happen and overall, glides were surprisingly bad. After 60 km, I had caught up with most pilots from the first start gate (only Marco and Balasz were far ahead) and needed a last thermal to make it to goal. The idea was to leave the ridge which wasn't working anyway and fly it through the valley. However, I spotted Suan climbing in the direction of the ridge and joined him. It only went up 1 m/s and I decided to race on, aborting the plans to go through the valley. Big mistake. I only encountered strong sink and waited too long to head for the valley after all. 12 km short...

If only I would have been more patient and climbed out with Suan. Suan made goal and was 3rd. Here are the results for task 1.

The day wasn't without surprises. European and World champion Christian Ciech landed after 53 km. Only 5 pilots reached goal and the average distance per pilot is less than 40 km. As a result, the day is devalued and worth only 640 points. So I only lose 200 points for not making goal. A bit lucky there.

The scores will still needed to be corrected though, since it looks like the 2 rigid pilots in goal have also been counted in the flex results. So, probably, the day gets devalued even a bit more.

The final day of the Euros was comparable to the 2 days before. A high risk of overdevelopment and thunderstorms in the mountains surrounding the valley. The task committee was again forced to keep us away from the mountains and to make the task short enough, so we'd land before things would go berserk everywhere. A 100 km task with 3 turnpoints and basically a 50 km final leg into goal was set.

Keen as I was to keep up the positive trend in my flying, I started hard from the start. Too hard though, because I soon found myself low. Did I ever do this before? I don't seem to learn... Well, the chase started from there. I only took the best parts of the thermals and didn't worry about not getting to cloudbase and soon was catching up. On the way to the second turnpoint, a thunderstorm was developing in the West. It's anvil was casting a large shadow which quickly started to cover the entire valley. The lead gaggle went straight through the middle of the valley, 10 minutes ahead, but for Suan, Zippy and me, this didn't seem to be an option anymore. We diverted to the East of the valley, trying to outrun the shadow. It worked quite well and we arrived in goal 10 minutes after the leaders. I was happy not to lose more time after the start, where I found myself low with Laurent and Petr Benes.

The leaders, Alex and Christian had a tight battle and Christian edged out Antoine & Alex on the final glide, ensuring his first European title, already being the reigning World Champion. Congratulations Christian! You're winning it while using the most daring tactics, such as choosing locations far away from the gaggle to take the start from a better position. Complimenti! 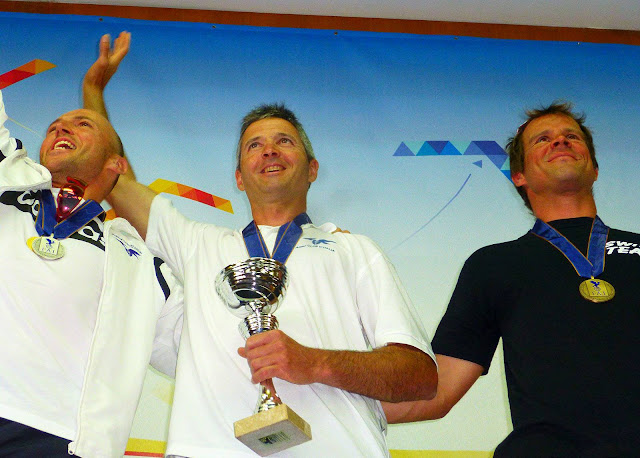 Complimenti also to the entire Italian team. They dominate hang gliding like Ferrari dominated F1 in the Schumacher era. It's obvious when you fly along with them that their radio communication is very efficient. If someone finds a better core, the Italian team is there in no time. The tactics are also impressive and resemble those used in cycling: splitting the team up to have front runners and other members dedicated to covering the opposition. As the sole Belgian, I can only dream of flying in such a team...

My compliments also to the Hungarian and Czech teams for their 2nd and 3rd place, beating the traditional countries. Not an easy feat and very well done!

My ambition for the Euros was a top 15 finish. Based on the second half of the comp, that should have been possible. I ended 22nd, mainly due to missing goal on the second task and a bombout which cost me a lot of time. But I'm happy about the progress and just have to eliminate the biggest mistakes for the next comp. CU later!

Task 7 was a 120 km task around the valley, dodging the overdevelopment (OD) areas in the mountains around the valley. The OD started soon, while we were waiting under a big dark cloud to start the race. The start gate shouldn't have been any later...

We all flew across the first gap in the mountains and found a turbulent lee-side thermal on the NE corner of the mountain N of Bitola. I decided to try the SW flank of the mountain as soon as I would be able to cross the ridge. Well, that really got me in some turbulence! It took a minute of searching before I hit a turbulent 5 m/s monster. I never gripped my speed bar that hard, but it ripped me up to cloudbase in no time. What an incredible sight to see the mountain fall away from you like that. I was impressed.

This thermal put me in the lead and we crossed the blue sky above the valley. The other side had nice clouds which were surely going to OD later on. The gaggle assembled in the next thermal and we raced to the North turnpoint. At this point, I decided to gamble for task victory. The lead gaggle continued deep into the turnpoint to get the climb under the next cloud, while I immediately turned around. Well, it didn't work. I didn't find the strong thermal I needed and went into 'bring it home' mode after that. Still, arriving 10th, 3 minutes after the leaders is a nice result and it puts me in 24th overall. So maybe, top 20 is still reachable...

Today is going to be the title decider. Italians Alex Ploner and Christian Ciech are only separated by 13 points, with a 100 point advantage on Swiss guy Peter Neuenschwander. Will the two World Champions battle each other and risk the Swiss to run away with it? Probably not, since the Italians have been unbeatable as a team. Anyway, let's celebrate hang gliding today and have a great task! See ya!

A bomb out and a re-flight for me yesterday. I started 20 minutes after the last start gate, so it was going to be very difficult to get a decent speed along the task, due to the 20 minutes handicap and having everybody 40 minutes ahead on course line.

Initially, the run was good and I caught a few people, but I got very slow in the shade near Prilep. Surely, for the lead gaggle the thermals in the shade were still more active, or I simply didn't find the strong one there. Lost a lot of time and only scored 570 points for the task. I can forget about my (already adjusted) top 20 ambition now.

Days 7 & 8 had thunderstorms, so we didn't fly tasks. We went for some swimming in the Ochrid lake and visisted Ochrid. Yesterday started with a CIVL meeting to talk about some general issues with some interested pilots and after that there was more swimming in an abandoned marble quarry. Picture by Matjaz: 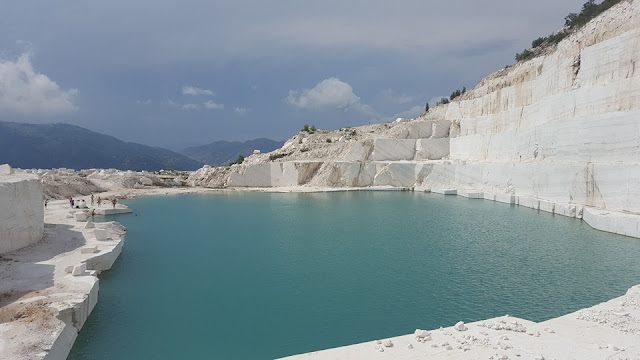 The day ended with a magic sunset on the Treskavec launch above Prilep: 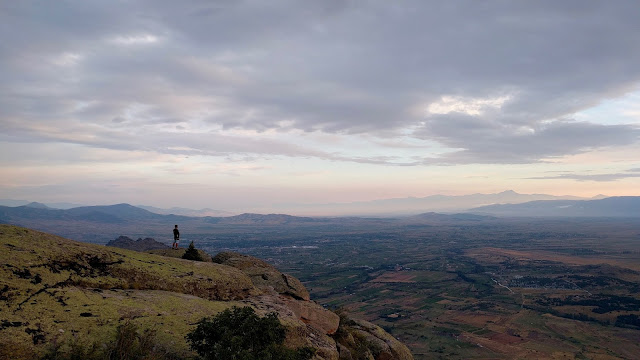 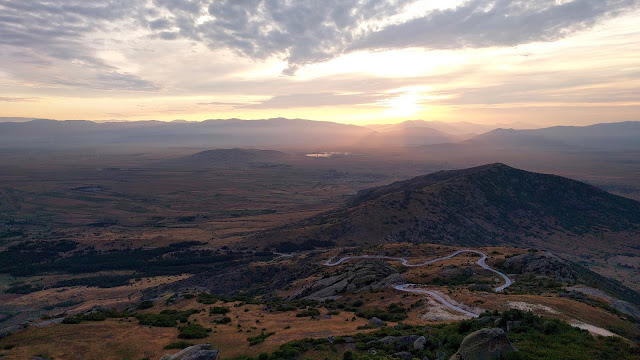 Task 5 was a 145 km task around the valley. Matjaz, Sasha, Mario and I had the most relaxed wait for the start gate at 2000 m above the valley. Others were being thrown around in turbulent thermals above the mountain. That was already a good start to the task :-)

We nailed the start and a lead gaggle formed in a washing-machine-alike thermal above Barakova. That was hectic! Luckily we left it pretty early and headed further into the direction of Pelister, the 2600 m high mountain West of Bitola. The real racing started from then on with 3 m/s thermals to 3000 m and long glides. We touched the Greece border and headed North, heading into quite a strong NE wind. I charged hard because it was my only tactical plan I had to try to win the task. 25 km from goal, my 3 m/s thermal quickly attracted Antoine's attention and we were both leading. Sadly, it suddenly stopped at 2000 m, which meant we needed an extra 300 m to make goal. The north turnpoint had a little hill in front of it, so surely the SW area, which was lee-side in the NE winds was going to provide the thermal we needed. But because the day was dying, we took it conservatively and stopped racing.

Arriving at the North turnpoint, we found some light broken lift. We searched the area for a few minutes until we saw the gaggle coming our way. That's when we made the mistake to leave for the next thermal hotspot. The following gaggle found some lift and easily made it in. Antoine and I struggled on the last turnpoint and barely made any height. At this point, Antoine was at least 100 m higher and when the thermal died, I decided to glide to goal in a direct line, over the spot which generated the last 3 m/s thermal. Alas, that didn't work and I was 3 km short :-( Antoine glided more North and arrived with excess height... Ouch, what a missed chance to make up quite a number of places!

Lots of leading points, but that's not worth much compared to making it to goal...